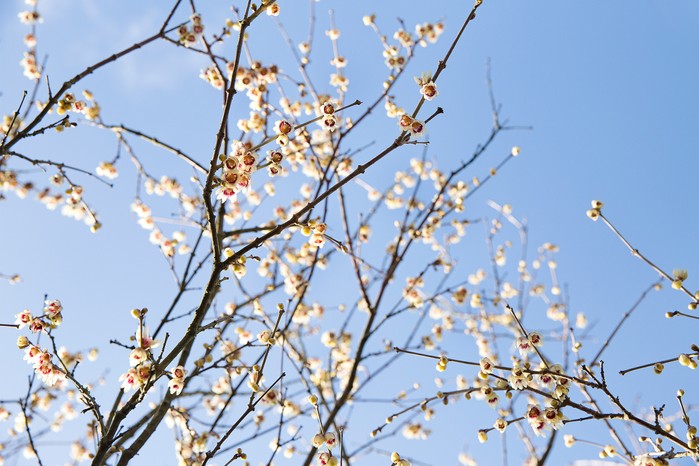 Autumn colours set the garden alight this month as trees stop producing the chlorophyll in their leaves, revealing fiery orange carotenoids, red anthocyanins and yellow flavanols. Late-flowering perennials like Michaelmas daisies and salvias continue to brighten the borders until the first frost. There’s still plenty of wildlife around and many animals are preparing for hibernation.

As autumn gathers pace and herbaceous perennials die back, resist the urge to cut and clear. Leave stems and seedheads standing and create habitat piles with leaves and dead wood. By cultivating a hands-off approach over the next few weeks, we can provide places for wildlife to shelter and survive the winter.

Prepare for the colder months by planting winter-flowering shrubs and climbers. Although there are not many pollinating insects out and about in the winter, those that do venture abroad need to find food. Honeybees might leave the hive on warmer days, and though most bumblebee queens hibernate over winter, some buff-tailed bumblebees (Bombus terrestris) live in active colonies between December and February. During this period, winter-flowering plants provide much-needed pollen and nectar. Container-grown shrubs and climbers can be added to the garden now and bare-root specimens planted out from the end of the month.

Winter honeysuckle is one of the most fragrant of all shrubs at this time of year. We love Lonicera x purpusii ‘Winter Beauty’ whose creamy-white, sweet-scented flowers please the bees as much as they delight us. Wintersweet (Chimonanthus praecox) is another fragrant bee-friendly shrub that flowers from December through to February. For evergreen structure, you could add an Oregon grape such as Mahonia x media ‘Winter Sun’ with its nectar-rich flowers from late autumn into winter, or Mahonia aquifolium to extend the flowering season into spring.

The best source of nectar in our garden once the autumn flowers die back is Clematis cirrhosa var. purpurascens ‘Freckles’. This winter beauty opens its nodding purple-flecked bells in November and keeps on producing flowers right through to early spring. Any bumblebees that visit our garden make a beeline straight for its hanging blooms. Other superb winter clematis include C. ‘Wisley Cream’, C. ‘Jingle Bells’ and C. cirrhosa var. balearica.

Plant up pots of spring bulbs this month to provide pollen and nectar supplies after winter-flowering shrubs and climbers stop blooming. Crocuses are beacons for early bees and their purple, yellow and white flowers are a cheerful sign that winter is nearly over. Plant crocuses 8-10cm deep (ensuring the pointy tip of the corm faces upwards) in peat-free compost with plenty of added grit for drainage. Early spring-flowering species like Crocus tommasinianus flower in February and March, providing an important food source for emerging queen bumblebees. This early crocus looks great in containers and it’s also the best choice for naturalising in grass.

In late winter, when there’s little other colour in the garden, the jewelled hues of Iris reticulata sparkle in our green roof. We grow ever-popular I. ‘Harmony’ with its striking royal blue flowers, interspersed with the deep purple of I. ‘Pauline’. If you prefer softer tones, try I. ‘Katherine’s Gold’, pale blue I. ‘Alida’ or the icy white and blue flowers of I. ‘Frozen Planet’. These diminutive irises are perfect for shallow containers or the front of a rockery or gravel garden.

Grape hyacinths (Muscari armeniacum) flower a little later, in April and May. The conical blue spikes are a collection of tiny bell-shaped flowers rich in pollen and nectar. They attract short-tongued bumblebees and solitary bees like the hairy-footed flower bee. Like crocus and iris, grape hyacinths need a well-drained compost. They look beautiful in containers mixed with other spring bulbs such as daffodils and tulips. Growing them in pots also controls their tendency to spread a little too enthusiastically when planted in the garden.

Provide a feast for birds without buying extra bird food by propagating new plants to add autumn berries to your garden. The best time to take hardwood cuttings of shrubs and climbers such as honeysuckle, elderberry and guelder rose is from mid-autumn until late winter, ideally just after leaf fall and before the first hard frosts. Hardwood cuttings may take a while to root, but they need little attention over winter and usually strike very successfully. They should be ready to plant out into the garden next autumn.

Keeping a pile of leaves will provide shelter for many creatures

As more trees begin to lose their leaves, make the most of this free, natural resource. Sweep leaves from ponds, lawns and gravel areas into piles to create shelter for hedgehogs, frogs, toads, beetles and other invertebrates. A hedgehog beat us to it one year in our garden, gathering leaves to make a domed pile beside our French windows. It was a privilege to know we’d provided a good place for it to hibernate.

Any leftover leaves can be used for leaf mould. Collect deciduous foliage from shrubs and trees. Store in mesh bins made of chicken wire and make sure leaves are kept moist. If you don’t have room for leaf mould bins, you can still collect moist leaves in black bin bags with holes in the sides. Shred larger leaves such as horse chestnut and sycamore to help speed up decomposition before adding them to the pile.

Leaf mould is a fantastic resource to add to homemade seed sowing and potting compost once it is well-rotted (over two years old). Any that is less than two years old can be used as a moisture-retentive mulch on flowerbeds. Don’t collect leaves from woodland – leaf litter is an important natural habitat for wildlife and, as it decomposes, adds nutrients back into the soil.

With the summer’s heatwave still on our minds and the likelihood of more high temperatures to come in future years, consider ways to become more water smart in the garden. Adding new herbaceous perennials to borders in October rather than waiting until spring is a good way to save water. Planted now, they’ll need less watering and should be more resilient to droughts by late spring and summer. Opt for wildlife-friendly perennials like sea holly, achillea and lavender that thrive in dry conditions, and they’ll keep producing nectar, even when other plants might struggle.

Look out for… galls

Often hiding on the underside of leaves or revealed on plant stems after leaf fall, these intriguing growths are usually home to tiny wasp or mite larvae. They come in the most wonderful array of shapes and sizes, from spheres to pincushions and protruding spikes. Most galls don’t harm the host plant. In fact, they play an important role in healthy ecosystems, providing food for birds in early spring before many caterpillars and larvae are available.

They removed the English ivy in my back yard and did a very good job.